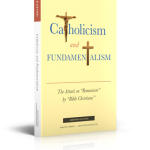 Karl Keating defends Catholicism from Fundamentalist attacks and explains why Fundamentalism has been so successful in converting “Romanists.” After showing the origins of Fundamentalism, he examines representative anti-Catholic groups and presents their arguments in their own words. His rebuttals are clear, detailed, and charitable. Special emphasis is given to the scriptural basis for Catholic doctrines and beliefs.

Praise for Catholicism and Fundamentalism

“Keating’s book is the classic and standard of all apologetics. He clears away the misperceptions and confusion Bible-only believers have of Catholics and shows why they themselves belong in the Church that wrote the Bible—the Catholic Church!”

“I strongly advise honest Fundamentalists not to read this book. They might find their whole position collapsing in ruins.”

“Mr. Keating has done his homework—all of it. The fruit of his exhaustive work may be commended most earnestly to all who yearn for the fulfillment of Our Lord’s prayer for unity in John 17.”

Thomas Howard, Author of Evangelical Is Not Enough

“A masterpiece of Catholic apologetics. Keating gives a solid defense of Catholicism against the critical attacks of Fundamentalists, done with patient charity that is bound to convince even the most prejudiced critic of Roman Catholicism.”

John A. Hardon, S.J., Author of The Catholic Catechism

To send donations from your Resource Partnership Ministry Program with PayPal, click the "Send Your Donations" button below. Please click "Location Information" within PayPal and enter your your Location Name, City, State and Zip.